The Smith Mountain Project, operated by Appalachian Power, is part engineering achievement and part community treasure. Built on the Roanoke River in the mid-1960s, the project's two dams and reservoirs — Smith Mountain and Leesville — have added nearly 600 miles of new shoreline and about 24,000 surface acres of water for community use. Its unique pumped-storage system provides electricity for the region and helps drive the surrounding area's economy as a focal point for tourism and outdoor activities.

There is no set schedule for operation. Typically, generation happens when demand for electricity is high and water from the lower reservoir is pumped back when demand for power is low. Operation can change hourly depending on demand.

*Under low in-flow conditions, the elevation at Smith Mountain can fall below 793 feet.

VISITOR CENTER CLOSED
Due to COVID-19, the visitor center is temporarily closed until further notice.

The Smith Mountain Visitor's Center overlooks the dam and is free and open to the public. The center has exhibits explaining the history of the dam and how power is generated in the unique two-lake complex. Additionally, there is a picnic area on Leesville Lake below the dam that is open to the public daily.

Islands on Smith Mountain Lake are important for their scenic value and for their contributions to recreation, aquatic, and terrestrial wildlife habitats. Appalachian Power's Island Management Plan includes provisions to protect them in the future including protection from erosion by using riprap — a permanent layer of large stones — that protects the soil surface.

These measures are helpful, but we all need to do our part. Public recreational use of Appalachian Power-owned islands is permitted, however we encourage recreationalists to: 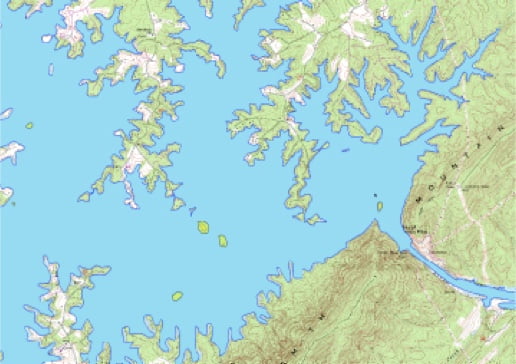 The idea for damming the Roanoke River at the natural gap of Smith Mountain in Southwestern Virginia had been promoted for a number of years before the project became reality. Originally proposed in the 1920s, it was another 40 years before Appalachian Power completed the two dams. Construction began in 1960 and was completed in 1963. Hundreds of workers cleared several hundred thousand cubic yards of mountainside and poured about 175,000 cubic yards of concrete to build the project.

The Smith Mountain Dam is a double curvature, concrete arch spanning 816 feet and rising 235 feet above the floor of the gap; Leesville Dam is a concrete gravity dam and is 980 feet long and 90 feet tall. The project created two lakes, covering primarily rural farmland. Smith Mountain and Leesville Lakes reached their normal "full" water level in 1966. Combined, they are almost 60 miles in length, contain about 24,000 surface acres and include 600 miles of shoreline.

Appalachian Power, a subsidiary of American Electric Power (AEP), is licensed to operate the Smith Mountain Project by the Federal Energy Regulatory Commission (FERC). The initial term was for 50 years. Effective in 2010, AEP relicensed operation of the project for a 30-year term.

The River that Runs Uphill

This historical film outlines the construction of the Smith Mountain Project, circa 1967.